Since January 1950, when TRUE published my first article on UFOs, there has been a tremendous change in the public attitude toward Unidentified Flying Objects. Before, the "flying saucers" were ridiculed by most Americans. Only a small number knew the dramatic evidence - confirmed reports by veteran pilots and other competent witnesses. Even fewer knew of the Air Force Top Secret Estimate of the Situation - that the Flying Saucers - officially Unidentified Flying Objects - were interplanetary vehicles engaged in a long observation of the earth.

Today, according to national polls, half of our population is convinced that the UFO's are real .Over five million people claim to have seen strange flying objects. Some newly convinced Americans, reluctant to believe we are being observed by a technically superior race, first ask if the UFO's aren't highly secret devices - American or Russian. But the massive documented evidence of tremendous speeds and maneuvers far beyond any earth made craft has proved this answer impossible. More and more millions now accept the long-hidden AF explanation: The UFO's are interplanetary probes from another world.

This great switch in public belief did not come about quickly. The January 1950 TRUE article put the first strong spotlight on UFO's, and hundreds of witnesses reported sightings they had withheld for fear of ridicule.

In 1952, a sudden outbreak of UFO sightings made front-page news, with hundreds of verified reports by military and airline pilots, control tower operators, expert radar trackers, and other reliable observers.

Early in 1953, one group of AF Intelligence officers connected with the UFO project planned to release their most baffling cases, also unexplained photographs of UFO's. No final conclusion was to be stated, though the released evidence would strongly point to the interplanetary answer. But at the last moment, fears of high-level officials caused the plan to be killed. Withholding of UFO reports and "explanations" to prevent public excitement steadily increased.

Despite this, many military reports leaked out because the pilots and others involved opposed this cover-up as a bad policy. In addition to UFO operations over the United States, thousands of similar reports came to light in foreign countries.

In November 1957, another outbreak of sightings further strained official withholding efforts, as a number of "touchdown" landings occurred in this country and abroad.

That same year, investigations were begun by NICAP - the National Investigations Committee On Aerial Phenomena - a private fact-finding group with headquarters in Washington D.C. As Director of NICAP, I have seen it grow to a powerful organization, recognized as the largest scientific UFO research group in the world, with over 12,000 members. NICAP has nearly 300 scientific and technical advisers and special consultants on space operations, astronomy, communications, and other fields bearing on UFO investigations.

Because of its serious and thorough evaluations, and its determined efforts to expose the numerous frauds, opportunists, and deluded persons spreading wild tales about UFO's, NICAP is now accepted as the highest private UFO authority in the world. Our documented reports to Congress and the press have played a major part in making hidden facts public.

After the "marsh gas" fiasco in the spring of 1966, millions of citizens began to reject the AF UFO explanations. High officials, still honestly believing that explaining away the sightings was the safest policy for the country, were caught in an unenviable spot.

The result was a decision to have an independent scientific investigation made - with officials agreeing to a "hands off" policy. The University of Colorado was selected, and a number of recent sightings has already had on-the-scene investigations by one or more scientists from the Colorado project.

Even before the project began operations, NICAP played a vital part, at the request of Dr. Edward Condon, the project head, and his scientific colleagues. In addition to advice on field investigations and evaluations, NICAP has made available several hundred verified reports, including many duplications of cases in AF files.

As a result, the Colorado Project has added to NICAP hopes for a fair and impartial report to the public. Although this is not due until late spring of 1968 - and more time may be requested - public pressure for all possible answers is rapidly increasing.

With at least half the country now strongly interested, it is now more important than ever to re-examine the strongest earlier cases, to search for possibly overlooked clues. It is also extremely important that witnesses to sightings put their reports on record, to help complete the picture and also to help the already lessening ridicule. 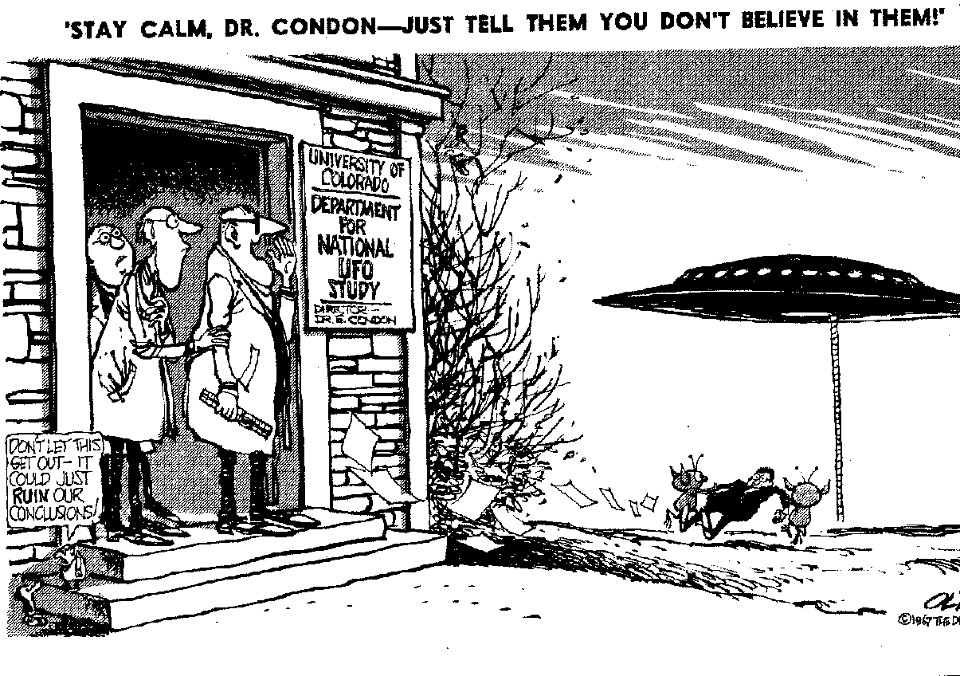 This half-million-dollar, 965-page report probably represents the ultimate case against the UFO "cult" – in fact, it was to be the last scientific word on that controversial subject. But, paradoxically, the report contains some evidence suggesting that the UFO phenomenon should be studied further.

It is an unfortunate feature of the report that the most provocative and unexplained UFO sightings are virtually hidden between extensive discussions of explained cases and often superfluous technical background material. For example, it is not until page 164 that the first detailed study of a truly interesting, unexplained sighting appears. In fact, the very intriguing sightings made by several astronauts are buried behind 85 percent of this section, most of which is concerned with irrelevant details of astronautics.

Scientific reports are seldom burdened with detailed studies of those blind alleys that produced little or no useful data - yet the Cordon report shuffles explained and unexplained cases at random, in what seems to be an almost contrived manner - and this tactic confuses or diverts all but the most dedicated reader.

If after a preliminary investigation it appeared that some UFO observations could not be easily explained, they should nevertheless have been highlighted in some way Then the explained cases should have been appended in order to show how an unexplained case might be rationalized through its similarity to one that is already understood.

The real crux of the matter, finally, would be the analysis of W. K. Hartmann, who discusses the question "Are misinterpretation and mis-reporting sufficiently common as to make credible the assertion that the entire UFO phenomenon, or at least the residua of unidentified cases, is the result of these processes (plus deliberate hoaxes)?"

But where is Hartmann's crucial question finally treated? It is practically lost in mid-volume - on pages 567 to 590. A critical conclusion is made there: that the truly unexplained sightings total less than 2 percent of all UFO sightings. This, at least, is a factual basis for many of Condon's preliminary remarks. But Hartmann's analyses should have been expanded within the context of unexplained sightings - not in the context of explained cases.

Furthermore, there is presumably somewhere in this study a detailed quantitative verification of Condon's contention that "... no intelligent life elsewhere outside of our solar systems has any possibility of visiting earth in the next 10,000 years." But so far I have been unable to find any comprehensive analysis to support that figure. It should have been recognized that the 10,000-year quarantine on the earth and Hartmann's statistics are both vital aspects of this study as long as there are still unexplained UFO sightings.

One can appreciate R. V. Jones's remark (page 932) that "they [UFOs] were either a fantasy or an incorrect identification or a rare and unrecognized phenomenon and while I commend any genuine search for new phenomena, little short of a tangible relic would dispel my skepticism of flying saucers." However, the counter-argument is that an incorrect identification of a rare and unrecognized phenomenon may be the clue to the discovery of a new phenomenon. These "new phenomena" need not necessarily be classified as flying saucers transporting intelligent extraterrestrial life; they could be some new form of atmospheric plasma, entering comets, or similar oddities.

Indeed, it would seem to be of basic scientific value to determine if there were a reasonably high probability that some new phenomena are at work in the unexplained UFO observations. The next logical step would be to see if a consistent pattern to these observations exists, and then to provide a set of hypotheses that might explain them.

Of course, the Condon group was not expected to provide such hypotheses - but in view of its claim of insufficient data it might have suggested new data-collection techniques for closing this data gap.

In sum, the veracity of most of the study seems to be beyond question - the Condon group has gathered and analyzed a significant subset of the significant facts bearing on the UFO question. Moreover, the group has presented important (although hard to find) evidence that seems to justify scientific investigation along many general and specialized frontiers. Therefore, it is not the facts that are subject to criticism, but rather their organization and interpretation.


Robert M. L. Baker Jr., teaches at the University of California at Los Angeles and is a senior scientist at Computer Sciences Corp. His specialty is aerospace dynamics.