Franz Kruchenberg designed the Schienenzeppelin (Rail Zeppelin) in 1929 after years of designing Zeppelin airships. It was his rigid airship experience that inspired him to create a futuristic train version of the Zeppelin that would literally  “fly” the rails, driven by an aircraft propeller located in the tail section of the bullet-shaped train. Since this revolutionary design would require massive financial investment, Kruchenberg proposed using existing rail lines instead of having to create new monorail ones for greater speeds. His proposal went forward with Reichsbahn (Reich National Railway) approval. 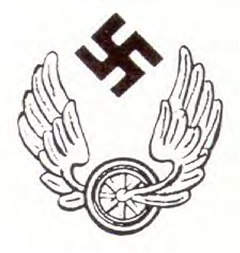 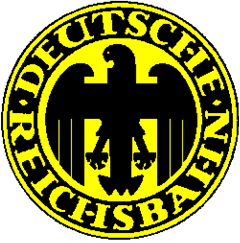 Construction began in early 1930 at the DRG Hannover repair shop and was finished in the autumn of that same year with Kruchenberg’s Flugbahn Gesellschaft using 8 engineers plus 30 workers.

The four wheeled, twin-axel train was 25.85 meters (85.305 ft) long, 2.8 meters (9.24 ft) high, and had an axel base of 19.6 meters (64.68 ft). The four wheels were each 1,000 mm (3.3 ft) in diameter. It was powered by a large BMW aircraft engine of 600 hp @ 1,460 rpm driving a four-bladed wooden propeller. The aluminum train was covered with fireproof canvas from the outside. Inside the car, the metallurgy, insulation, and wood was disguised. The flight compartment was followed by  the passenger compartment, a non-smoker region compartment, then the entrance area with buffet in center of the car as well as the smoking compartment and a toilet. The rear car half was provisionally not developed but served during the trial trips as an area for measuring instruments, tools and spare parts. Because of the high driving speeds closed windows were implemented and a ventilating system was planned. The Schienenzeppelin was thus ready for the trials. 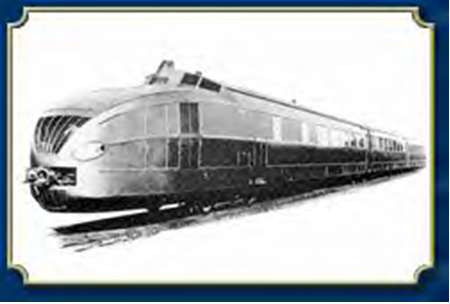 Unexpected delays occurred, however, when no German insurance company would insure the vehicle driven by a propeller. So Kruchenberg turned to a foreign company for insurance- the famous Lloyds of London.

The Schienenzeppelin made a demonstration run in June 1931 from to and further research and development was approved over the next three years. The Schienenzeppelin made almost daily test runs over many areas of ; however, no regular passenger usage was made of the train by the Reichsbahn as it was not issued a vehicle identification number due to critical analysis over the practicality of the design. The biggest objection to the Schienenzeppelin was that the train’s infrastructure was not stressed for high speeds over long periods of time, not even after the vehicle had magnetic brakes installed.

Secondly, reverse drive with the aircraft engine was impossible. A two-piece train couple, with propellers on both sides, was briefly tested but proved impractical. The "pilot" had to have an assistant hanging from the window during reversing which was of course awkward and impractical.

By 1934, the Schienenzeppelin was considered too unorthodox and potentially a dangerous design for use on the regular railways so it was sold to DRG for RM 10,000 and kept in storage in a metal hut in Berlin-Tempelhof. Crowds had marveled at the beauty of the streamliner but had to stay far way from the aft BMW engine with large propellers.

A planned test ride to was subsequently cancelled. The Schienenzeppelin was immediately converted in 1934. The new Maybach diesel engine was moved to the nose of the vehicle, and became a more conventional train design minus the propeller engine.

Franz Kruchenberg continued to work on the concept of the high speed rail trains which were built in the 1930s such as the “Fliegende Hamburger” (Flying Hamburg) and the inferred train couples, but the German railways were a hundred years old in 1935 and not suitably fit for the introduction of high speed rail trains.

It was therefore decided that the Schienenzeppelin was not suitable for normal passenger transport based on the following factors: attaching of additional railroad cars was not possible due to its construction; the BMW aircraft engine at upward gradients failed since the air flow decreased significantly; also, the Schienenzeppelin could not be started by the propeller alone - an additional DC electric motor drive was needed to get the train moving.

Only one model of  the Schienenzeppelin was built and was ordered scrapped in March 1939. With the outbreak of World War II its aluminum outer skin was used for other military projects while the German Army needed the diesel fuel for other vehicles.

The gained experiences of the Schienenzeppelin, however, were used with the construction of the more practical Kruchenberg three-part railcar couple (SVT 137 155), competitor produced in 1938. In June 1939  high speed rail testing resumed with the SVT 137 155. A top speed of 215 km/hr (135 mph) was reached. After the war, Kruchenberg devised the train couples VT 10 501 "Senator" and VT 10 551 "Komet", which had little success. Afterwards, he remained involved in train developments in which met with some success. 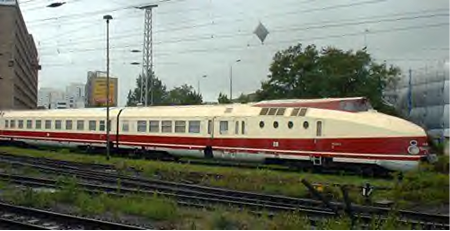 More Infos you can find in the german Wikipedia:
http://de.wikipedia.org/wiki/DR_Baureihe_VT_18.16

But his greatest achievement was that of the Schienenzeppelin, a radical design well before its time.

The world falsely believes that the first bullet trains came out of Japan in 1956, debuting at the Japanese Olympics - the Shinkansen that started out at a mere 210 km/hr (130 mph) - 20 km/hr (13 mph) slower than the Schienenzeppelin record of 1931!
Some technical data:
Length 25.85 m (85.305 ft)
Height 2.8 m (9.24 ft)
Weight 20.3 tons (40,600 lbs)
Steel framework covered with fabric outside and wood inside
Two axles powered by a BMW aircraft motor of 600 hp via wooden propeller
Auxiliary DC–electric motor with battery (37 kW) for shunt-braking (which was done by rotating the propeller the other way and with a magnetic track brake; emergency braking distance from160 km/hr (100 mph): 360 m (1188 ft)
24 seats and luggage/measurement room