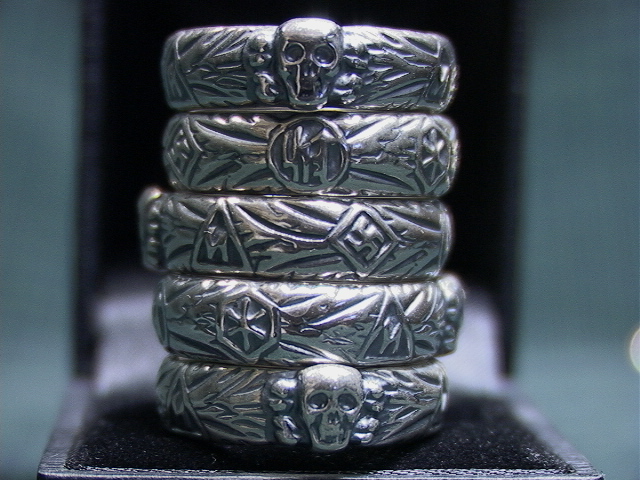 The potency of imagery in the SS brotherhood was not lost on its leader, Heinrich Himmler, and was clearly in his mind when early in the life of the organization he instituted the Totenkopfring der SS (April 1934). The ring prominently featured the runes and mystical symbols of the SS, symbols that played a significant role in magnifying the veil of obscurity and mystique that covered the organization. The award was both a product of, and a source nourishment to the hint of arrogance that surrounds all military units that consider themselves elite. The Totenkopfring der SS ring was not a National decoration and could not be earned per say. It was rather a gift from the Reichsführer to reward those senior officers who showed outstanding achievement, devotion to duty, and loyalty to the Führer. Initially it was reserved for “old guard” officers whose membership number was under 5,000, but eligibility requirements relaxed to the point that by 1939, any officer with 3 years of duty was eligible. Besides the seniority requirement, officers had to have an impeccable dossier in order to be recommended for the ring. If the SS discipline code was broken after the presentation of the ring and the officer was demoted, suspended, or expelled from the SS, they were required to return the ring and the citation. A citation was presented with the ring and read as follows:

I award you the SS Death's Head Ring. The ring symbolizes our loyalty to the Führer, our steadfast obedience and our brotherhood and comradeship. The Death's Head reminds us that we should be ready at any time to lay down our lives for the good of the Germanic people. The runes diametrically opposite the Death's Head are symbols from our past of the prosperity which we will restore through National Socialism. The two Sig-Runes stand for the name of our SS. The swastika and the Hagall-Rune represent our unshakable faith in the ultimate victory of our philosophy. The ring is wreathed in oak, the traditional German leaf. The Death's Head Ring cannot be bought or sold and must never fall into the hands of those not entitled to wear it. When you leave the SS, or when you die, the ring must be returned to the Reichsführer-SS. The unauthorized acquisition of duplicates of the ring is forbidden and punishable by Law.
Wear the ring with honor!

As one can see from the citation the ring was doused in symbolism.

It was manufactured by the firm of Otto Gahr of Munich and each ring was hand finished by firms under its supervision.

The ring was engraved on the inside of the band with the letters “S.lb" (for “seinem Lieben”, or “to dear”) followed by the recipients’ last name, date of presentation, and a facsimile of Himmlers’ signature.

It was normally presented at SS promotion ceremonies, and was worn on the left ring finger. The Deaths’ Head Ring was a coveted award within the ranks of the SS, and was taken very seriously. Every presentation was entered in the Officers’ Seniority List (Dienstaltersliste), and a notation was made in the recipient personnel file. In case of the death of a ring holder, his next of kin was entitled to the notation as a keepsake, but the ring was returned to the SS Personalhauptamt. The ring was then to be preserved at Himmler’s castle in Wewelsburg, in memory of the holder. Accordingly, if a holder was killed in combat, the ring was removed from his person and was handed to the unit commander, who would arrange for it to reach the castle via the SS Personalhauptamt. The rings of fallen SS officers made up the Schrein der Inhabers des Totenkopfringes (Shrine to the holders of the Deaths’ Head Ring), and were cared for with the due respect and reverence. On October 17th, 1944, as a result of the hardships of war, the Reichsführer-SS canceled manufacture and presentation of the ring for the duration of the conflict. Official SS statistics show that during its 10 year life, approximately 14,500 rings were presented. By January 1st, 1945, 64 percent had been returned to the shrine, 26 percent were in the procession of their holders, and 10 percent had been lost in the battlefield. This means that a little over 3,500 rings were in circulation outside the shrine at the end of the war. In the Spring of 1945, with the Wehrmacht in full retreat, Himmler ordered that the rings cared for in the Shrine be blast sealed into the side of a mountain near Wewelsburg, in order to prevent their capture by the Allies. To this day, they remain undiscovered.

Heinrich Himmler and the SS