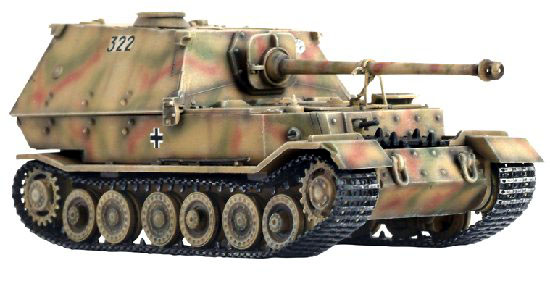 Although the armor of the new weapon, especially the front armor, is said to be harder to pierce than that of the Pz. Kw. 6, the Russians have found the former easier to set afire. They have nicknamed it the "Ferdinand."

A Russian staff officer makes the following observations regarding the performance of the "Ferdinand" on the and fronts, where the Germans, counterattacking, used a number of the new heavy weapons and Pz. Kw. 6's as battering rams in an attempt to force breaches in the Russian lines.

During one battle the enemy assaulted our positions with 300 heavily armored vehicles, among them were about 50 "Tigers" and "Ferdinands." While the battle was taking place along our forward positions, 12 of our own heavy self-propelled guns remained hidden in their earth fortifications. When about, 20 "Tigers" and "Ferdinands" broke through our forward lines, our self-propelled artillery moved out from their concealed positions in order to fire by direct laying. An ambush was prepared near the threatened area, and the pieces were camouflaged.

Fire against the German armor was commenced when the attacking vehicles were about 500 yards away from our cannon.

Our first rounds were successful. At 500 yards "Tigers" suffered gaping holes in their turret armor and side armor. At 300 yards we pierced their frontal armor, and blew their turrets clean off. Hits on the side armor at this range nearly split the vehicles in half. It was somewhat different with the "Ferdinands." Their armor—the front armor, in particular—was more difficult to pierce, but their tracks, suspension, and side and turret, armor were no harder to damage and destroy than those of the "Tigers." The Germans lost at total of 12 "Tigers" and six "Ferdinands."

In another battle the same heavy armor of the enemy was engaged by our ordinary medium artillery, which used both special and regular ammunition. Three of our pieces were emplaced to form a triang1e; they were reasonably far apart. This triangular disposition permitted unusually effective fire against "Ferdinands." Although the "Ferdinand's" fire is very accurate, its fixed turret does not permit it to shift its fire rapidly. When the gun is caught in a triangle, it is virtually helpless, because while it engages one cannon the other two take pot-shots at its vulnerable points. If the piece directly in front of a "Ferdinand" does not disclose its position by firing, the other two can usually dispose of the big gun with no loss to ourselves.

Obviously it is not always possible for us to arrange a battery in a triangle. Therefore, we require the closest possible cooperation between the pieces of a battery and also between neighboring batteries.

Point-blank fire from our medium tanks in ambush armed only with the 45-mm cannon, has taken care of many "Tigers" and "Ferdinands," as have land mines, Molotov cocktails, and cannon fire from our fighter planes.

It is also reported that the circular hole in the rear of the "Ferdinand's" fighting compartment is extremely vulnerable. This hole provides room for the recoil and the ejection of shells. Russian observers state that grenades or Molotov cocktails thrown into this opening can put the vehicle out of action.

It is reported that the crews consist of six men: A gun commander (usually a lieutenant, who is either a tank man or in artilleryman), a gunner, a driver-mechanic, a radio operator, and two additional gun crew members.

On the offensive, the battalion moves in two echelons. The first echelon consists of two companies abreast, with each company in line and with a 100-yard interval between guns. The second echelon consists of the third company, also in line. The distance between echelons has not been reported.

Although the gun itself is excellent, the mounting has certain pronounced defects. (1) The gun can fire only to the front, and is effective only when stationary. (2) Poor vision from the fighting compartment allows more maneuverable tanks and antitank weapons to get in close to the gun.