In the aftermath of the 2nd World War the U.S. in realisation that its intelligence gathering capabilities had been, historically, sadly lacking and the perceived threat from the Soviet Union, President Truman signed the National Security Act of 1947. This act set up the National Security Council and the Central Intelligence Agency (C.I.A.) and was followed in 1949 by the CIA Act which determined that the CIA's activities and budget would be classified and also stipulated that any other government agency could transfer funds to the CIA - without regard to any provisions of the law. The CIA Act also decreed that if any of its activities were exposed, the U.S. Government could "plausibly deny" any responsibility for the CIA 's actions.

In the bid to improve methods of gathering "intelligence" regarding the military activity of the Soviets, Major John Seaberg, an aerospace development engineer at Wright Patterson AFB, conceived the idea of a very fast jet capable of over-flying Russia at 70,000ft. - well out of the range of Russian weapons. This jet would be equipped with the latest "intelligence gathering "equipment, cameras etc. and would be capable of obtaining highly detailed photographs from a safe altitude.

This concept gained approval, however the administration of the project was allocated to the CIA. Initially Seaberg offered the contract to build the aircraft to 3 small companies but Kelly Johnson of Lockheed managed to outsmart him - Johnson took his design with a delivery date of 8 months directly to the CIA. and succeeded in obtaining the contract.

Edwards Air Force Base was deemed not to be "secure" enough for the test of such a craft so Johnson gave his top test pilot, Tony Levier, the task of finding a suitably secure area in the Southwest where it would safe to do so. Levier checked a number of sites before arriving at a dry lake - Groom Lake in Nevada - adjacent to what was called the Atomic Energy Commission Proving Grounds (later re-named the Nevada Test Site). Groom Lake proved to meet the requirements of a testing site for a top-secret aircraft - a ready surface for landing, unpopulated and unattractive because of the pollution caused by radio active fall out.

The controlled area of the AEC was expanded to include Groom Lake and the CIA set up a fake company - CLJ -to administer the sub-contractors who were hired to construct the base. Initially a mile long runway, hangars, a concrete ramp, a control tower and mess hall were constructed and although described as Watertown Strip officially, the base became known as "Paradise Ranch" or simply "The Ranch" by air crews.

The first prototype "Aquatone" was flown (dismantled on a transport plane) out to Groom Lake on 24th July 1955 - later became known as the U-2.The Ranch, however, was administered by the CIA and Lockheed - it was not an Air Force base - and U-2 pilots when recruited had to resign from the Air Force and become employed by the CIA. Such secrecy was enforced by the CIA that the pilots who flew the transport aircraft bring U-2s to the base were not told where they were heading and for the latter part of their journey were guided in by radio. All personnel working at the Ranch used aliases whilst on duty - returning to their normal I.D.s when they left the base.

The successor to the U-2, code-named "Archangel", required a much longer runway than that at Groom Lake. However, security was so good at the base that it was decided to extend the runway and in effect, build a small town which included a movie theatre, a bar and a baseball field. In 1962, Groom Lake or the Ranch was renamed, it now became known as "Area 51". To add even more confusion, Nellis AFB began calling the base by the call sign of its control tower - "Dreamland". At this time the restricted air space above Area 51 was extended to 600 square miles. The new aircraft, a high altitude reconnaissance plane, was originally called the RS-71 but due to a mistake by a president's aide it came to be known as the SR-71 and because it was painted black (part of its anti-radar protection), it became known as "Blackbird".


The SR-71 was followed by the development of the D-21 Tagboard, an unmanned drone which was not a success and eventually AREA 51, in 1973, it became the developing ground for "Stealth" technology. Once again Lockheed obtained the contract to develop stealth aircraft, code-named "Project Harvey" after the invisible rabbit of the same name. From 1977 stealth aircraft - stealthy to the extent of being virtually undetectable by radar - have been tested at AREA 51 and it is rumoured that "visual stealth" is now being developed which one such mysterious craft being called "AURORA" - the existence of a craft under that name is, however, highly debatable.

One theory given for the name "AREA 51" is "because the CIA seems to have the ability to act independently of the U.S. Administration and because the base itself is completely autonomous, it has, in effect, become a self governing state - the 51st". 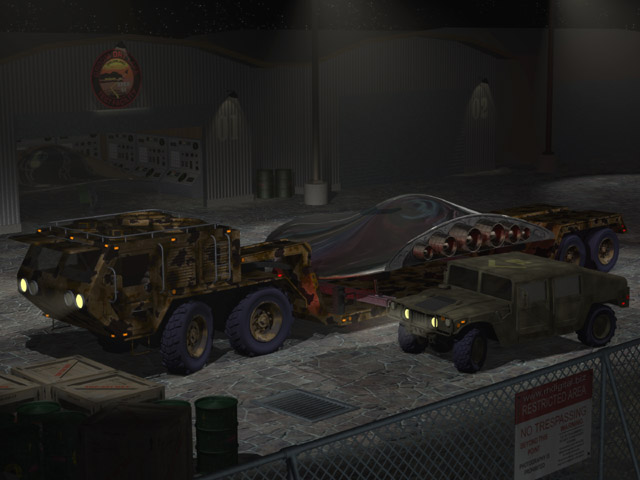